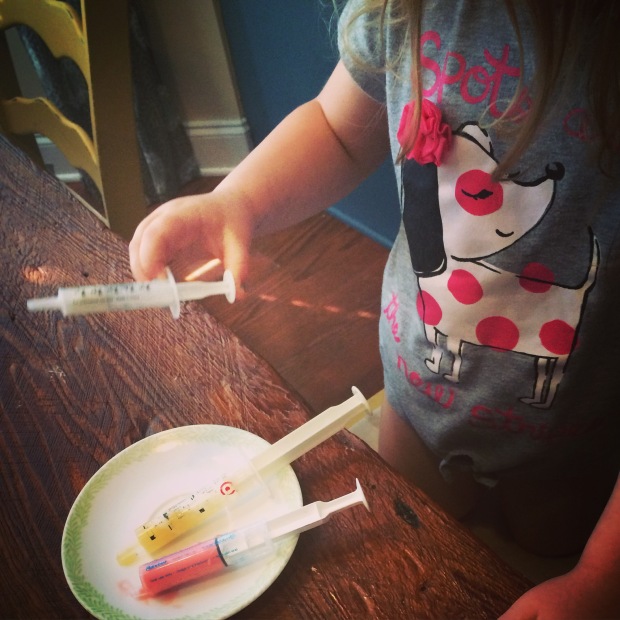 This has been a strange week of adjusting for us.  Earlier in the week we noticed some swelling and redness in one of Harper’s feet that began to spread.  I thought maybe she got bit by something, but as it turned out she had developed cellulitis.  We don’t know if it started from a bite she had before or if it came from the multiple IV attempts they made in that foot in the ER last week, but at any rate, we added antibiotics to her daily medicine diet.

When we are asked how Harper is doing at this point, the answer is, “Good.”  We have made it a week now with no seizures, so that is awesome.  However, no seizures comes at a cost- all of those meds. This new combination has greatly altered Harper’s moods.  She is back to being very cranky and aggressive.  She cries- a lot- and hits and throws things and becomes very defiant.  I know that she’s three- I’ve survived two other girls through the terrible three’s!  This is different.  She’s pretty tired most of the time, but is having a more difficult time falling asleep again, and is fairly restless when she does sleep.

We spend a good portion of our morning and evening trying to get the meds in her, particularly this week since we’ve added an antibiotic twice a day- that means she has to take two syringes of medicine plus two capsules of sprinkles, all twice a day, and she hates all of it.  She also has a very decreased appetite and doesn’t care to eat much of anything, even yummy stuff, so we don’t have a lot of options with hiding her meds in her food right now.  So we are back to brainstorming ways to get things in her, and dealing with the screaming and fighting (and having it spit all over us) when we just have to force her to take them.    I always thought medicine was such a simple fix for a problem, but between the battle to take it and the side effects of it, it’s anything but simple.

So, that’s where we are as we approach the weekend.  Feeling so thankful for no seizures and no damage from this last one, and adjusting to new normals of medication routines and unpleasant side effects and finding that balance between living and protecting her from germs (and keeping her from hurting other kids as her body adjusts!).

There have been moments this week where I have felt sad, frustrated, overwhelmed, and even lonely… But praise God, they were just moments.  Those moments come and then they go, and I’m left with the peace that surpasses all understanding- that comfort of a loving Heavenly Father who is with me through it all, who has yet to forsake me, and who never fails or disappoints.

The Lord your God is with you, the Mighty Warrior who saves. He will take great delight in you; in his love he will no longer rebuke you, but will rejoice over you with singing.   -Zephaniah 3:17