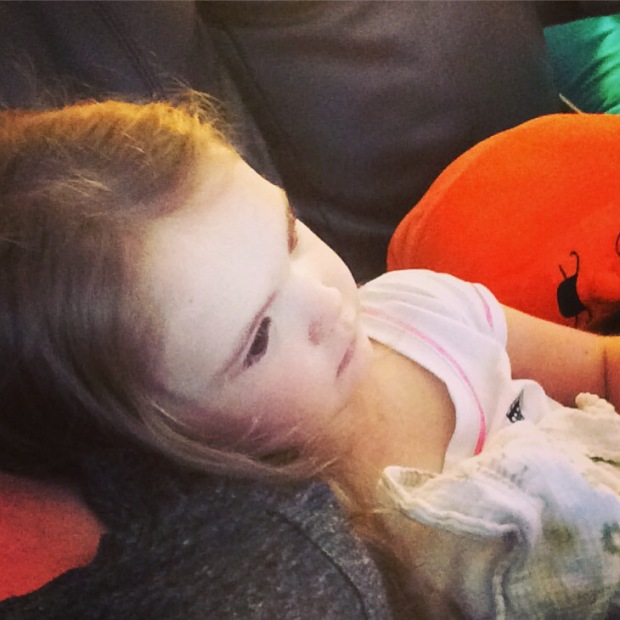 As we sit here like this, her head on my shoulder, her body perched on her spot under my arm, we try desperately to find a little rest, both of us worn out from our early morning.  But rest evades us as her poor little body keeps twitching, her muscles tensing and spazzing every so often as a result of the seizure activity that has plagued her today.

She spent last night in her big girl bed for the second night in a row… A request she made and I posted about on social media: She has her very own big girl room complete with her very own big girl bed- that she has never slept in. Because over a year ago she started having seizures, mostly when sleeping, so she’s slept in our room ever since. Until tonight. She asked me so sweetly if she could sleep in her big bed in her room, and I couldn’t tell her no. Because I never want to rob her of her independence. I never want to rob her of a normal life. I never want to make her feel that she “can’t” do anything because of her illness. She is a warrior, a child of God with a big purpose, and I never want her to doubt that. So, tonight she is a big girl, in her own bed in her own room… But mommy will be close by 😉

So for two nights she slept in her room, and for two nights I slept at the foot of her bed- a move that seemed silly to me at first, but proved to be the right move this morning.  Before dawn this morning she began to stir, and in my own sleepy stupor I placed my hand on her and slept on.  Yet in the midst of my dreaming I kept feeling her move ever so slightly under my hand, and eventually I woke enough to recognize the clicking sound she was making, the sure tell sign of a seizure in progress.

She had a series of cluster seizures for what felt like an eternity, but being cluster seizures they didn’t individually last for more than 2-3 minutes at a time with a 1-2 minute break between each one.  I was so thankful for those little breaks because I was able to get her to take her oral emergency medication rather than using the Diastat kit.  And it worked, keeping us out of the emergency room.

I spent the morning in contact with Duke and our pharmacy, getting everything taken care of.  There were all of these little signs and episodes that I had noticed over the past couple of weeks- things that seemed individually insignificant at the time, things that I tried to overlook and not make an issue of.  I do notice every slight difference in Harper’s demeanor, and I always worry about being too observant, worry that I’m making mountains out of molehills.  So I file these things away in my mind, but 99% of the time my premonitions are correct when it comes to her.

After consulting with her neurologist about all of those things and this morning’s seizures, it was decided to significantly increase one of her daily medications, almost doubling it.  They had been hesitant to do such a big change initially due to the increased risks of side effects- dizziness, lack of coordination, balance issues, headaches, tremors, and nausea- but they now feel it’s necessary.  It will take a few days for her levels to catch up, so for the next three days we also have to take the emergency tablet twice a day… Meaning she will be highly medicated all weekend.  That isn’t exactly the answer I want, but it seems to be the best we can do for now.

I’m praying fervently that this works through the weekend, because the neuro also told me that if I see any further seizure activity she’ll have to go ahead to the hospital to be evaluated, and we certainly don’t want it to come to that.

I’m also trying hard to keep my emotions in check.  I’m tired.  We’re so very close to my husband returning home, for which I’m so grateful, but he’s not here yet.  I’m getting very little sleep right now, and I’m physically drained from the constant holding and touching and hitting and pulling.  I’m frustrated and angry- I hate seeing my daughter suffer.  I hate to see this malady slow her down, to see an illness try so hard to control her life.  I hate to see her withdrawn and quiet, without a smile on her face- that’s not my Harper.  While I’m proud of her for taking her meds and being such a trooper, I hate that this is her normal, that she has to spend her days so medicated.  And I’m scared.  Because she’s only three years old and it already takes so much to keep these seizures under control- how can she keep up this pace?  What does this mean for her future?  How can she have a “normal” life with all of these risks and meds and side effects and unknowns?

So I have a lot of emotions, a lot of concerns, a lot of questions… And not a lot of answers.  But there is one who not only knows and has the answers, but ultimately is the answer.  And that’s where I have to keep my focus. He is the great I AM, and though my flesh wants to fight against it, that is the only answer I need.